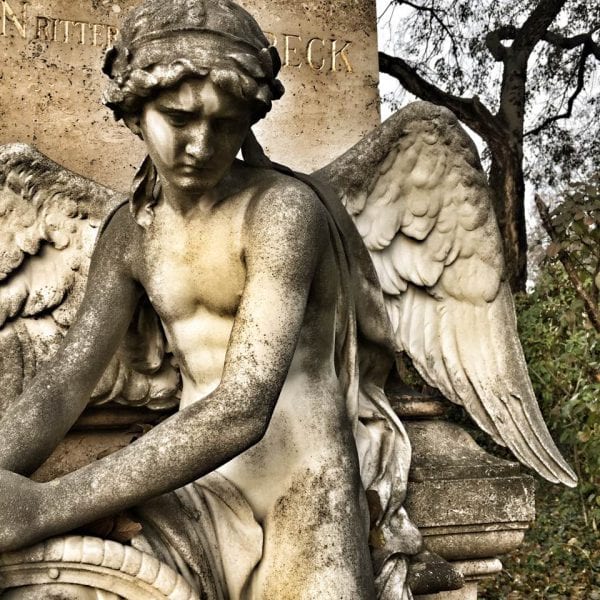 Tuesday night and Wednesday in the Celtic seasonal calendar is the feast of Samhain and in the Christian liturgical cycle the Feast of All Saints (followed by All Souls). It is a very special time of year when the northern hemisphere is moving toward growing darkness and is time of preparation for stillness and rest. In the Irish imagination, this is a threshold time, when the veil between worlds feels especially thin. Darkness invites us to rest into the mystery of things.

This is one of my favorite moments of the year’s unfolding. Three years ago at this time the belongings we had kept in storage in Seattle – two pieces of family furniture and boxes of family photos – arrived to our home in Galway, bringing a deeper sense of rootedness here for us. Having those tangible connections to our ancestors felt like a gift in those November days.

In May 2016, we traveled to Vienna, Austria to lead a pilgrimage group and spent some time at the beautiful Central Cemetery. This is the place where my father is buried alongside his parents. I visited his grave and encountered there a cuckoo bird circling from tree to tree, calling out to me again and again. I had never had an encounter like this before with my father’s spirit. As many of you know, much of our travel over the last several years and the time we spent living in Vienna had to do with healing this difficult relationship.

I took the cuckoo bird to be a sign of his reaching out to me and have been holding that image for the last several months, savoring the solace it brought. What puzzled me about the cuckoo bird’s appearance is that it lays its eggs in the nest of another bird, removing the eggs already there, and lets the other bird warm its own offspring to hatching.

Then in October 2016, on the anniversary of my mother’s death and while receiving a massage from a very gifted woman here in Galway, I had a waking dream while lying on the table in the liminal space between waking and sleeping. I had been dealing with a difficult situation and my father appeared to me saying that the eggs that had been given to me were not mine to mind and doing so would take away the nurturing from my own new birthings. I began to weep at this gift of clarity.

In the dream, my father then asked me for an embrace, and I felt such an overflow of love toward him like I have never experienced. I could suddenly see him as both his innocent child self and the grown man he had become. His parents also appeared and encircled us both with their embrace. I saw this gorgeous light in the distance, the stunning gold light of October sun. I said to the three of them that they didn’t need to stay here any longer, they could walk toward the light, and so they did.

I lay there for several minutes following and savored this encounter, it felt like such a gift. After I got dressed and went out to see my massage therapist, she said that she felt my father’s presence in the room and this beautiful golden light surrounding us both. I was stunned, because I had said nothing to her of the dream and there is no way she could have known what had transpired. It was a gift of confirmation.

I have continued to savor this opening to deeper love and freedom in the months that have followed. These are the kind of magical encounters that can happen when we open ourselves to them. Almost twenty years after my father’s passing, a great healing arrived.

May you experience the thinness of the veil in your own life and may the ancestors guide you with their wisdom and love.

Join us for our online retreat Honoring Saints and Ancestors, and together we will make a journey of remembrance during this holy time of year