I am delighted to share another beautiful submission for the Monk in the World guest post series from the community. Read on for Sharon Perry’s reflection “The Imaginary Candle.”

“The men in the jail want you to come and teach them how to pray” the Chaplain requested on the phone. I asked the Chaplain if the men knew that I was a woman. He answered that they did indeed know who I was, and they were waiting for me to come. He explained that, “After you taught the women in the jail how to pray, news traveled to the men, and now they want you to come and teach them.” I was amazed and deeply touched that the Lord was opening up a whole new world to me.
I had spent six weeks in one of the county jails in Tennessee teaching two groups of women how to pray using “The Lord’s Prayer” as a model. I was doing my dissertation on the effect of prayer on depression, anxiety, and self-esteem in women who had experienced trauma. I had five different groups of women in three cities with whom I was doing this research study. Two of the groups were with twenty women in a local county jail. I had no idea what God was going to do through these times together and that a seed was planted that was about ready to burst into a great harvest.
At the beginning of each of the weekly training sessions on prayer a candle was lit followed by the reading of a Psalm and a few minutes of silence. This exercise was to help the women focus and to come to a place of calmness and quietness. I wanted to introduce to the women the act of thoughtful observation and reflection. For many of the women this was their first experience in contemplative prayer. The lighting of the candle seemed to be a positive beginning—more than I realized.
I was not allowed to bring candles or any kind of flammable objects into the county jail for obvious reasons. I told the women we would have to use our imaginations as I “lit” an imaginary candle. I wondered if the women were engaged with this exercise until one of the weeks when I arrived one of the inmates reminded me to please not forget to “light the candle” for them. I understood then how present these women were during our times together. They anticipated the “lighting of the candle” every week followed by the moment of silence and reflection. It had become a time of deep peace for them.
I was amazed at the depth of healing that God was doing in these women during the times of contemplative prayer. I realized that some of these women had never learned how to “pause and to think” about their lives. I saw them begin to hear and wonder at the beautiful mysteries that God was speaking to their hearts. It seemed so simple of an exercise but yet God came in profound ways. I once again observed and experienced that if we “create a space” that God really will come—even in a county jail.
I realized that these times of prayer would not completely take away all of these women’s problems or erase the crimes that they had committed. But I also realized that God was pouring His love upon these women and healing their hearts. They had taken a moment to pause and to receive and God showed up.
The beauty and kindness of serving God is that when He touched these women He also poured into me. He was changing me in ways that I could never change in myself. Many times when I sat in the county jail teaching and praying, I would look around at the women as they poured out their hearts to God and realized that there was no other place that I would rather be than gathered together with them in worship.
How can I live as a monk in the world? One way for me is to demonstrate to “the least of these” the stillness and quietness of contemplative prayer. The chaplain told me that the women who were part of the training course that I had taught on prayer six months earlier were still praying together every evening in their jail cells. They begin by “lighting their imaginary candle,” and silently sitting in the presence of God.  Jesus said, “Where two or three are gathered together in my name, there am I in the midst of them” (Matthew 18:20). I am waiting in anticipation for what God will do with the men… 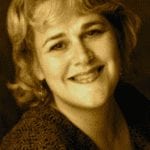 Sharon Perry has a DPhil from Oxford Graduate School with research in spirituality and health. With degrees in dance and theatre she desires to bring beauty and healing to the world through prayer and the arts. She spent eleven years as a missionary in Latvia. Visit her online at TheSimpleWonders.com