Feast of St. Gobnait – Patron of Bees ~ A love note from your online abbess 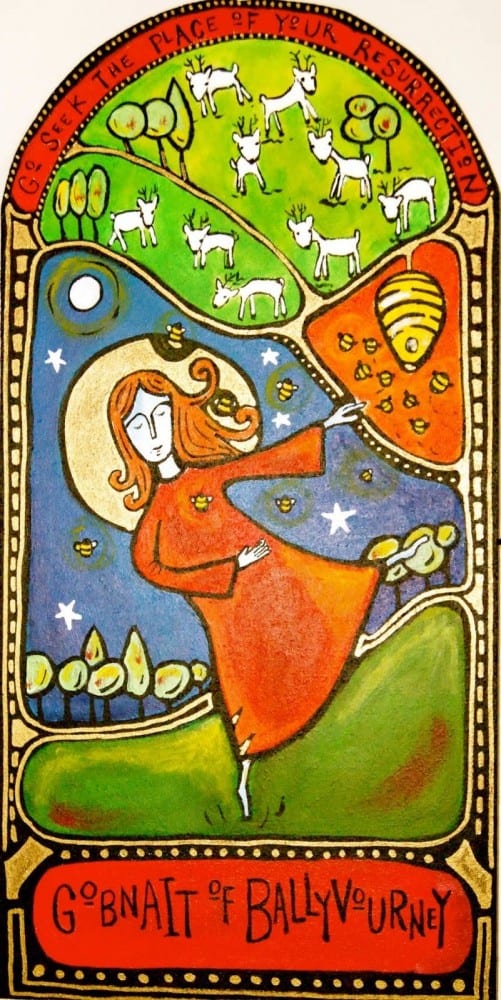 St. Gobnait and the Place of Her Resurrection*

On the tiny limestone island
an angel buzzes to Gobnait
in a dream, disrupts her plans,
sends her in search of nine white deer.

she falls gently to wet ground,
sits in silence as light crawls across sky,
lets their long legs approach
and their soft, curious noses surround her.

Breathing slowly, she slides back
onto grass and clover and knows
nothing surpasses this moment,
a heaven of hooves and dew.

Is there a place for each of us,
where we no longer yearn to be elsewhere?
Where our work is to simply soften,
wait, and pay close attention?

She smiles as bees gather eagerly
around her too, wings humming softly
as they collect essence of wildflowers,
transmuting labor into gold.

Gobnait is perhaps one of my favorite of the Irish saints. She is a 5th-6th century monk who fled her home in County Clare and headed first for the island of Insheer, one of the three Aran Islands off the coast of Connemara. It is not clear why she fled, only that she was seeking refuge. There is a beautiful church ruin there on the island still dedicated to her where we bring our pilgrims.

There is a deep and rich tradition among the Irish monks to seek out the place of one’s resurrection. This was often done through the practice of peregrinatio, a setting sail without oar or rudder to let the currents of love carry them.

The story tells us that an angel appeared to her to instruct her to go on a journey to the place where nine white deer would be grazing. Only there would she would find her true place of resurrection. She wandered through the counties of Waterford, Cork, and Kerry in search. At first she saw three white deer in Clondrohid and followed them to Ballymakeera where she saw six more.

Finally, when she arrived to Ballyvourney in County Cork, where there was a small rise overlooking the River Sullane, that Gobnait saw nine white deer grazing all together just as the angel had promised, so she settled there and founded her monastic community. I have been to her holy site there as well and it is also a very special place with still much reverence for her witness.

I love the stories of the Irish monks and their wandering. I know that sense of feeling called somewhere, only to be called to move again long after I thought I had settled for good.

Have you found the place of your own resurrection? The place that brings you alive and where your gifts can thrive?