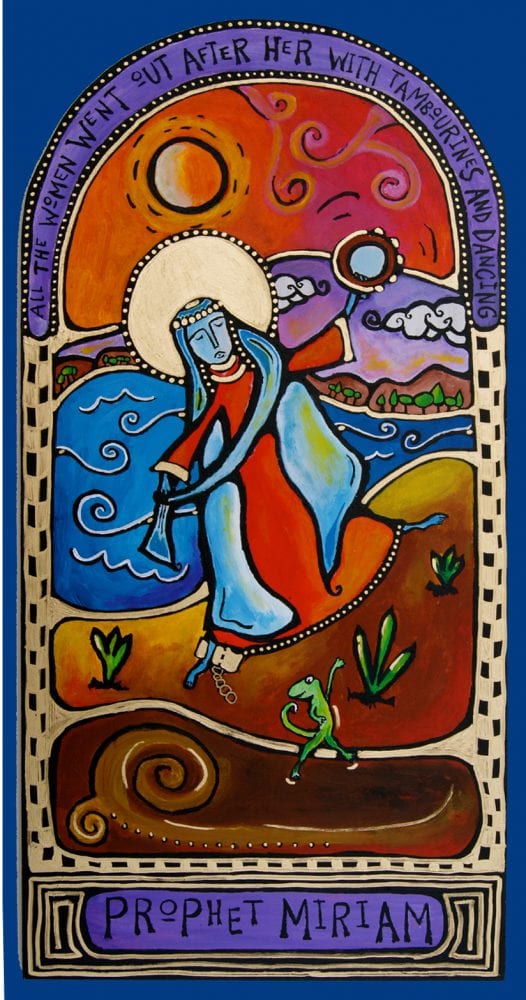 Miriam on the Shores

“All the women went out after her with tambourines and dancing.” – Exodus 15:20

Her skirt hangs heavy with seawater,
staccato breath after running from death.
She can still feel soldiers reaching out
to seize her blouse before the waves caved in.

Collapsing on dry earth for a moment,
the impulse to dance begins in her feet,
spreads slowly upwards like a flock of starlings
rising toward a dawn-lit sky.

So many dances in secret before,
night-stolen movements after exhausting days
heaving stones and harvest.
She finds herself now upright, weeping.

To stand here, face to the sun,
feeling an irrepressible desire to
spin

Savoring freedom with her limbs
as if it were a physical presence
like a fierce wind or the breath of labor,
shackles slipping off slowly.

She couldn’t help but dance.
The story says she picked up her tambourine,
which means she had packed it among the essentials.
In fleeing for her life, she knew this would be necessary.

How many of us still live enslaved in Egypt, beholden and weary?
Do you have the courage to run across the sea parted just now for you?
Will you carry your musical instrument and dance right there on the shores?

On January 29th will be our next monthly live video seminar following my book Illuminating the Way: Embracing the Wisdom of Monks and Mystics. Our theme is Miriam and the archetype of the Prophet.

You might imagine this scene from the poem above and feel it viscerally. Imagine yourself running for your life with your community, knowing that if you slow down you will be sent back to slavery or perhaps even death. And while the celebration of God killing the Egyptian soldiers may feel repellant, we can look at the story from an archetypal perspective and see the divine presence at work here in favor of freedom rather than slavery, doing what is necessary to allow freedom to thrive.

Arriving on the shores of the other side, it is written that Miriam takes out her tambourine and leads the women in a public celebration and worship of this God of liberation. In the midrashic texts, the ancient rabbis give great praise to Miriam for her tremendous trust in God reflected by the very fact that she was carrying her tambourine with her, in anticipation of the celebration. We can imagine her forethought, in the act of packing whatever she could bring in that hurried exit from Egypt, her tambourine felt like an essential. It is reflective of the depth of her trust that they would be liberated and there would be cause for music and dancing.

In that moment of unbridled joy, they are on a threshold as a People. As we know, the story says they continue wandering for forty years in the wilderness trying to reach the Promised Land. They will grumble many times over their hunger and discomfort and even reflect longingly on their time back in Egypt when they at least had food and shelter guaranteed. But none of that matters in this pause to celebrate the gifts so generously given. They will return to their human ways soon, but in that moment they touch the divine grace in a fully embodied way.

I love that in the limited texts we actually have about Miriam, this is one of the most significant. It is believed that this Canticle of Miriam may be the oldest, written portion of the Hebrew Scripture. And here she is clearly a leader in the community and enacts a ritual to mark the importance of the occasion. Her tools are music and dance to unleash the joy that this moment deserves in response. With her given title in the scriptures as “prophet,” we can savor this role of the prophet – to name the divine liberation and invite the community into a ritual which helps them to experience this more fully.