Abbey Bookshelf: “Prayer in the Cave of the Heart” by Cyprian Consiglio

We are offering the occasional review of some of our favorite books on the contemplative life. This review of Prayer in the Cave of the Heart* by Cyprian Consiglio is written by long-time fellow monk in the world Edith O’Nuallain: 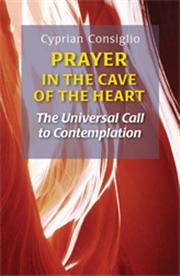 Cyprian Consiglio , a Camaldolese monk, wrote his book Prayer in the Cave of the Heart as an introduction to contemplative prayer. The sub-title says it all,  ‘universal call to contemplation’, a phrase penned by contemplative monk, Fr Bede Griffith, whose life’s work bore witness to the belief that contemplation is available to everyone, not just cloistered monastics. Consiglio believes that eastern traditions can help to invigorate and illuminate aspects of our own spirituality.

Two guiding principles inform the entire book – that the Spirit is already and always indwelling, and that the path to the Spirit is through ‘prayer in the cave of the heart’. We practice meditation and contemplation with the intention of removing all obstacles placed between ourselves and the Divine, who is eternally present to us even when we are not aware.

There are many forms of meditation and contemplative prayer. Consiglio explores a few from Hinduism, Buddhism, Taoism, and Orthodox Christianity. The author himself completed his book while staying in a Christian ashram near the Ganges in northern India. Here the monks and nuns base their practice of the Liturgy of the Hours and ‘lectio divina’ around Hindu traditions, including four hour-long periods of silent meditation. Many of the outer elements of their practice are based upon gestures, symbols and chants from Indian spirituality, resulting in a seamless marriage between Christian and Hindu contemplative practice, without either ever collapsing into the other.

While we can never know exactly how Jesus himself prayed, we can deduce that his was an interior form of prayer, evidence for which is suggested by his instructions in Matthew 6:6: “But whenever you pray, go into your room and shut the door and pray to your Father who is in secret, and your Father who sees in secret will reward you.” In other words, “when you pray, go into your heart.”  Prayer is the way we access the power of the Spirit. Prayer doesn’t change God, it changes us. The Spirit which flows through us, pours out of us in service and love of others.

However, as with all interior work, we must be careful not to become pre-occupied with the self, but rather to seek the Spirit’s dwelling place. Consiglio writes:

“We are going through ourselves to get beyond ourselves. The journey is through our own experience, through our own souls, through our griefs, joys and pains, but it is decidedly through them, in the belief that there is something on the other side of them if we don’t get caught up in them.” [p36]

Still everything is to be worked through, as we engage with the unconscious through dream and shadow work, as we follow the

“serpentine path into the depths of ourselves.…. if we follow the path right to the end, beyond the merely psychological, we shall finally come to the deepest level of all, the “treasure hidden in the field” of which the gospel speaks – the pure, undifferentiated consciousness, stripped of all that is egoistical and personal, the central core of our nature, where the light of God shines.” [Dom Cyprian Smith, quoted p 37]

This is the same path which is taught by many Hindu and Buddhist traditions, as well as by Christian mystics, a central theme running through this book. He notes that the ‘via negativa’ is a prayer path followed by Zen Buddhists, as well as mystics such as Evagrius of Pontus, the author of the ‘The Cloud of Unknowing’, John of the Cross, and Meister Eckhart. The ‘via negativa’ aims straight for our deepest interior spaces, which is where the Divine dwells within us.

Consiglio explores specific forms of devotional practice, beginning with the practice of continual and ceaseless prayer, which is the ultimate aim of all contemplative practices. Ceaseless praying was taken up by the Desert Ammas and Abbas, eventually developing into what became known as the Liturgy of the Hours – set times of daily prayer: matins, lauds, prime, terce, sext, none, vespers, and compline. But constant prayer is not just found in Christian traditions, as evidenced by the Buddhist recitation of sutras, and the Muslim salaat. In constant prayer we align ourselves with our own deepest centre.

From continual prayer Consiglio moves to ‘pure prayer’, defined as prayer beyond words and images’. It is an apophatic form of prayer, meaning that knowledge of God is impossible; human language can never hope to capture God in its limited concepts. For Consiglio the apophatic tradition

“is the roadmap of the journey on which we set out when we meditate, attempting to leave behind all our thoughts about God, and all our images of God…We hope ….to enter within the secret chamber of divine darkness, leaving outside all that can be grasped by sense or reason.” [p59]

Hence we leave behind our ego, our concepts, our limited thinking.

Muslim scholars speak of the “gradual dissipation of the self so that the self is forgotten and God [is] remembered.” Sufism refers to this as ‘fana’, “the annihilation of the self”. Thomas Merton referred to fana as “the nothingness of all that is not God. My prayer is then a kind of praise rising up out of the center of Nothing and Silence.”  It is precisely in the apophatic approach to prayer, in this interior space beyond language, beyond dogma and doctrine, where we discover resonances with other mystical traditions. Monks and contemplatives from all traditions share similar experiences of meditation and contemplation.

In his final chapter Consiglio describes my favourite contemplative practice – ‘lectio divina’, presenting it in the context of everything we have learned in the preceding chapters, emphasising that in lectio we are listening to God’s word through sacred scripture. Chanting psalms in choir then becomes an exercise in proclaiming God’s word to one another. What a wonderful image to carry into liturgical celebrations!

He describes lectio as like “reading a love letter,,,, savouring every single word …… condensing and simplifying” until we are left with a word or short phrase which serves as a remembrance of our prayer time, like “the pearl of great price, the treasure hidden in the field.” It could become our mantra for that day, “a summary of our intention, a tangible reminder of our moment of intimacy with God, like a wedding ring or an amulet worn around the neck”.

Consiglio concludes that “the real goal of all our meditative techniques and methods [is] the transformation of the body and soul by the power of the indwelling Spirit of God.” We reach this nirvana of spiritual enlightenment through the ceaseless practice of unceasing, contemplative prayer. As inheritors of a deeply incarnational religion, Christians are well placed to join their Buddhist, Hindu, and Muslim sisters and brothers in contemplative practices which, Consiglio shows, are more often similar than dissimilar in intention and method.

Each chapter concludes with a section on the “Question of Method”, covering such topics as meditation using the breath as a point of focus combined with reciting mantras. Most of the methods presented have their roots in eastern traditions which Consiglio presents from a Christian prespective. In this way he attempts to make real his vision of a new Christianity enlivened by the rich and fertile teachings from other contemplative religions.

Edith Ó Nualláin lives with her family in a small village on the east coast of Ireland, snuggled between the mountains and the sea, where she reads, writes occasional reviews, and spins exotic fibres into yarn. Some day she hopes to learn how to spin straw into the gold.

*when you purchase books at Amazon.com through links provided on our website, we receive a small percentage of the purchase price at no extra cost to you which helps support our Earth Monastery Project.