I am delighted to share another beautiful submission for the Monk in the World guest post series from the community. Read on for Kevin Peterson’s wisdom about practicing the presence of God in the tasks of daily life:

Being a monk in the world…what does that mean to me?

When Christine asked me to consider writing about being “a monk in the world” I was at once excited and apprehensive. What do I have to offer to this tremendous conversation on the contemplative life that wouldn’t be better said from someone else?  What could I possibly say that would be profound or inspiring? I looked at the “Monk Manifesto” and thought about the commitment I made to practicing each item, then on to which of them I do well(times of solitude and silence) and which I struggle with (Radical acts of hospitality/cultivating community) but that was too broad in the space allotted so I went to work on what else I could offer.

I started with simply copying the invitation from the Abbey of the Arts onto a blank piece of paper, and then ruminated on the words of it, what was really being asked? I read many of the previous installments to hear the wise words of those before me, I ruminated some more, allowing the ideas and rhythms of the language to roll around free in my noggin. After several days of this I made a list, on the same piece of paper, of all the things in my life that I’ve done under the topic of contemplation, I became a bit dismayed for a pattern of life started to show itself there in black and white….I like to dabble…to try many many things…I like to dabble a lot! The list was overwhelming.

So I went back to the invitation and one of the invitational suggestions was to limit to a single practice or life event, a daunting task as I then made a list of significant life events from dropping out of high school to getting married at 17 to working as a jail cook to becoming a Christian to getting a job at a large high-tech company to running a non-profit to brain trauma to leading marriage groups to raising 3 kids, their marriages, family illnesses, grandkids, 33 years of marriage, etc etc etc. So I ruminated some more, looking at the page periodically throughout the week, waiting for something to stand out, to speak, to hear what God would want me to share.

Then in a flash I (sort of) remembered a quote from Brother Lawrence in The Practice of the Presence of God something like this “even as I turn the little omelet, I do it with and for God”.  I was a professional cook for many years so his life and description of life resonated. With this in mind I pulled up a PDF copy of the book (stored in the vast multitude of things collected on my computer over the years) and while looking for the quote I was struck at the reading before me….here was what turned me on to my life practice over 30 years ago, I was struck dumb looking at the pages and realizing that here is the overarching practice that I’ve been doing (sometimes well, sometimes not) that has enhanced/enlightened all the dabbling.

After reading his little book when I was a new Christian I took it at face value and began practicing the presence of God in everything I do, speaking continually to him as I go about my day, asking his help as I do jobs that are well outside my education level or skill, deal with people that are difficult and/or from a whole different universe.

Throughout the day and night, calling my thoughts back to God and a present conversation with Him, often repeating little prayers/request/praise as I go about my tasks (please don’t let me screw this up, make me a blessing to my boss today, etc). At times, when life was the most hectic and overwhelming, I would start with a list of grievances or request for relief, only to find myself overflowing in praise.

I’d be cooking my little heart out during a dinner rush and actually dancing and singing with the orders flying out of the kitchen. Another time I went to pick up my paycheck and realized it wasn’t even half of what I needed to pay the bills and I started the conversation on the drive home, after a few miles of my complaining/worrying I found myself in a rapturous emotion desiring to roll down the windows and shout how good God was.  Times were hard, very hard but God was so real and available and awesome.  Through this practice of continual touching of bases with God in everyday moments I learned to slow down, to take the blows of life in stride, to allow things to ruminate in my noggin, to be at peace.

Here is a quote of someone who knew Bro. Lawrence that really puts things in my current life in perspective as they are words I often hear from people to describe me (which was not the case 30 years ago):

It was observed, that even in the busiest times in the kitchen, Brother Lawrence still preserved his recollection and heavenly-mindedness. He was never hasty nor loitering, but did each thing in its turn with an even, uninterrupted composure and tranquility of spirit. “The time of work,” said he, “does not with me differ from the time of prayer. In the noise and clatter of my kitchen, while several persons are at the same time calling for different things, I possess God in as great a tranquility as if I were upon my knees at the Blessed Supper.”

From this lifetime of practice I have gained wisdom and confidence.  I seem to be have stripped that little gear that says I can’t do something or that I should be afraid or that I’m not worthy. It has freed me to step into amazingly varied situations and needs in life, to speak with calm wisdom into situations, to grasp that God really is in control and its OK.

Recently it has also allowed me to explore the creative, to write contemplative poetry, to make art, to challenge the edges and limits of my life, to find space in new groups of people(like the Holy Disorder of Dancing Monks) and really BE in the world. 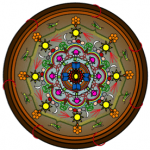 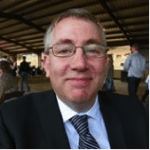 Kevin Peterson is a process engineer who lives in Portland with his wife of over 33 years, an active member of Sunset Covenant Church and VP of NorthWest Outreaches. He combines contemplative practices with poetry and art. Samples can be found on his website: www.kevinandnancypeterson.blogspot.com/ (contact Kevin.Peterson@intel.com)