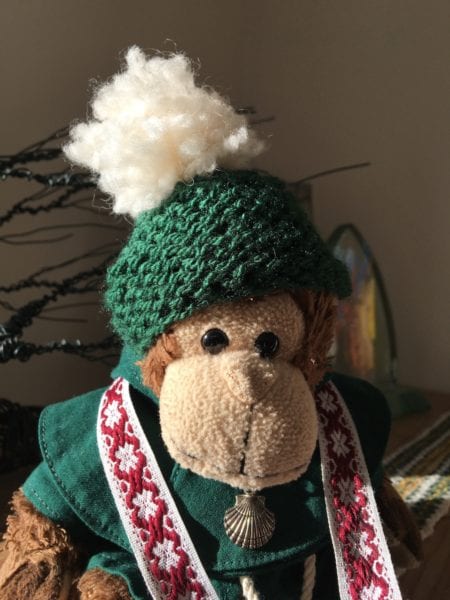 Today’s Irish phrase translates to “There’s no fireplace like your own fireplace.” It’s our version of “There’s no place like home” . . . but with a fireplace. Not that we have a fireplace here in Christine and John’s apartment. But I had one growing up and most places in Ireland do. Fireplaces are very traditional in Ireland. Even pubs with central heating usually have one, at least for show. And so I am not at all upset that my current abode doesn’t have one . . . even on cool Autumn nights or cold Winter evenings.

(Sorry, John. I’ll stop about the lack of a fireplace.)

As some of you may know, my adopted home town of Galway City was named European Capital of Culture for 2020. Exciting, I know! And just recently, Lonely Planet ranked Galway as the fourth best city IN THE WORLD to visit in 2020. Everybody, except maybe Dubliners, loves us . . . and even the Dubs come here for a fun weekend now and again. So while it’s against my humble Irish monkey nature to brag . . . I can’t help it.

The competition for European Capital of Culture was fierce. We were up against the actual capital of Dublin, the large and vibrant city of Limerick, and several smaller and charming towns from the south east that banded together in what they called The Three Sisters. There were also four cities in Croatia that were competing for their own Capital of Culture competition, as there are two each time, from different countries. But that’s someone else’s story to tell.

Halfway through the competition, which included writing up this HUGE bid book with all the great cultural stuff going on in town and how winning would be helpful to us in the future, the judges were supposed to eliminate two cities and only two Irish cities would be in the finals . . . so to speak. But when the judges, after visiting all four (That was nerve racking, was it not, John?), they only eliminated Dublin. Odd, to be sure. But it was right after ‘The Big Smoke’ had decided on an almost all male-authored retrospective at the national theatre and . . . there was backlash. (#WakingTheFeminist, am I right, John? John knows what I’m talking about.)

Once the celebrating was over – and since this is Galway and we’re really good at celebrating, that took a while – the real “fun” began. A non-Irish person who had experience running another European city’s Capital of Culture was hired to run things here in Galway. But in the end it wasn’t a good fit. It’s unclear whether locals were upset that he didn’t seem to be very good at the job or he wasn’t good at the job because locals were upset that he got the job. But he left and someone else took over and still people weren’t happy. I hate to air Galway’s dirty laundry in a worldwide public forum, but it’s no secret that funding goals weren’t reached and people in town felt excluded and . . . Well, the only thing everyone seems to agree on is that nobody is completely happy . . . Which sadly, everyone is secretly happy about.

But we’re back on track and the programme was launched at a really amazing ceremony in Eyre Square with local and European artists and it’s all good. There are still people who aren’t happy, but that may just be more them than anything else. ‘Tis a matter of finding happiness in your own skin . . . even if you haven’t got a fireplace at home. (Sorry. I forgot my promise there for a moment.)

Being European Capital of Culture isn’t the only thing we can brag about here in Galway. Like I said earlier, Lonely Planet is after naming us the fourth best city in the world to visit in 2020! It doesn’t matter what the other cities are; I can only brag about one city at a time. I’m sure your cities have plenty to brag about, too . . . but back to Galway for the moment.

Everybody in town was over the moon that wee Galway, barely a city at all with under 100 thousand inhabitants, would even be considered for such international recognition. Many a city council member was seen to be posting about it all over their various social media accounts. Only, the Lonely Planet article about why Galway was chosen started off by mentioning the thriving busking scene in Galway. Busking is street performance – mainly musicians and street theatre. However . . . prepare for more dirty Galway laundry . . . wasn’t the city council just after voting in new, highly restrictive, anti-Busking bylaws that go into effect in 2020? Some of the very same politicians who voted to all but ban most busking in town are now basically bragging about said busking. I wasn’t going to mention that, because it makes Galway look bad and might dissuade some people from visiting. But some of the bylaws might be unconstitutional and so a law suit to throw them out might stop them before they start. And besides, it’s just not the Busking that brings people to Galway . . . although it doesn’t improve an already wonderful experience.

At the end of the day though . . . pride of place/home isn’t about outside recognition . . . or even a fireplace. (Sorry. I couldn’t help myself.) It’s about finding joy in what’s already around you, about what’s on the inside that counts. And one thing that Galway had long before any Capital of Culture or Lonely Planet nonsense was Macnas. The word macnas, or de Bhaldraithe in Irish, means “joyful abandonment.” It’s the perfect name for a local street theatre group that has been putting on parades in Galway, and around the world, for decades. They build giant, two-story, puppets. They walk on stilts. They juggle. They dance. They dress in magnificent handmade costumes. They interact with the crowds along the route. They create magnificent and magical mischief!

As a small monkey, I’m a bit too small to participate as a performer or assistant. But as a small monkey, I can get the most amazing vantage spot positions along the parade route as it twists and turns its way through the city centre. Before meeting Christine and John, my monkey friends and I would love jumping from building to building and along the tops of the heads of the crowds to follow the parade. But now . . . the parade goes by our flat on the Westend of Galway. I can sit on our patio with a hot chocolate . . . maybe a hot toddy . . . and wait for the parade to come to me. I don’t need a fireplace to make me warm or happy. (I’m not sorry about that mention of our non-fireplace.) It’s a warm and happy home because of who lives here.