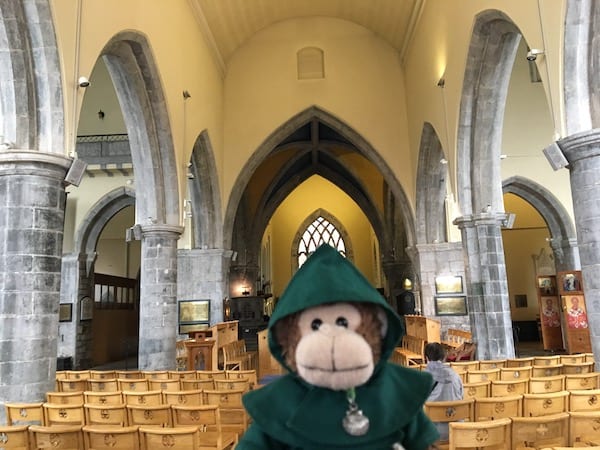 The Irish phrase above is one of my favourites. It translates into English as “A good start is half the work.” So, since we’re still just starting with these stories of mine, I thought I’d share this one with you. I just hope I haven’t literarily (or should that be metaphorically?) painted myself into a corner by setting up a precedent to start each one of these with a bit of Irish. Like most Irish, I’m a bit self-conscious about my less-than-fluent Irish skills. But I’m also proud of my Irish heritage and since Galway is a designated bi-lingual city . . .

Anyway, I’m back with another story about my adopted town – The City of Galway. And one of the best places to start telling you about Galway is at the founding of the formal walled city by the Normans. And one of the first (and perhaps most significant) buildings in Galway is St. Nicholas Church. It’s the oldest church (among many – I’ve lost count myself) in the city centre and has quite an interesting history.

The original church was built around 1320 or something (I’m not sure; I wasn’t there). But it’s been added to a couple of times since then, expanded and what not. There’s even a lovely wee bell tower now. Oh, the clock tower only has clock faces on three of the four sides. One explanation is that the people from the neighbourhood that can’t see a clock face didn’t donate enough towards the new clock tower and so didn’t get a clock face. But back then, there weren’t really a whole lot of people living between he church and the river, just the cloistered Catholic nuns across the river. And that’s the other explanation, that the Protestants didn’t want to give the Catholics the time of day. (I swear it’s a funnier joke in person here in Galway.) Anyway, it’s a small clock tower and a big auld clock mechanism and there’s just no room for a fourth clock and as I said, fewer people live on that side of the city centre. (And the nuns had their own clock and church bells.)

But that’s enough time spent on the clock tower. (Okay, that was the last clock joke; I promise). Getting back to the church . . . it’s named after Saint Nicholas of Myra (that’s in Turkey; sorry for all the geography). You might know him as “Santa Claus,” but he’s also the patron saint of sailors, so there are churches named after him all up and down the west coast of Europe. There’s even another one right . . . (Sorry. I’m getting ahead of myself here. Monkey Mind!)

(Where was I? Sailors?) Oh, speaking of sailors (trust me, it relates!) . . . Christopher Columbus went to Mass here in 1477. Local legend has it that a local couple meet him and took a liking to him and so gave yer man Chris a copy of St. Brendan the Navigator’s map . . . and that’s why Columbus was able to make it to the “New World” as he was following the saint’s famous journey. (Christine can tell you more about that; I just really like the bit about the Easter whale, but anyway . . .)

Another infamous visitor to St. Nicholas Church was Cromwell (that is Oliver Cromwell’s army; he couldn’t be bothered to travel here himself; he just sent some really mean army guys like Edmund Ludlow who went to the beautiful Burren region just south of Galway and complained about it not having enough water to drown someone or trees to hang anyone or soil to bury anybody . . . Don’t get me started.) Where was I . . . oh, yeah! The Cromwellian soldiers desecrated St. Nicholas and turned it into a stable for their horses for a while. (Best stable they ever had, that’s for sure.) Eventually it was converted back into a church, but (plot twist!) a non-Catholic one this time.

Now as a cradle-Catholic, I could let that last bit get to me . . . but what’s the point? That was ages ago and the new congregation is very generous in sharing the sacred space with visitors and holding all sorts of great musical concerts there (some for free, which I really like) AND two Orthodox churches in Galway also share the worship space. They even have a female vicar, which is cool and long overdue! (Again, don’t get me started.)

So, let’s ignore the past negativity and focus on some of the more beautiful aspects of the church itself. It has a gorgeous stone baptismal font and stain glass windows that don’t get nearly enough credit. (Seriously, come see them for yourself.) The pulpit and choir stalls are beautiful. (I’m a huge fan of carpenters and carpentry.) And I really like the Orthodox icons in the side chapel. But my favourite bit is the columns . . . or more precisely, the “Apprentice’s Column.” You see, all the columns in the church are the same, except for one. It’s not very different, so one would be excused for not noticing it the first time (or the first several times, like I did . . . There’s just so many wonderful details, like the gargoyles and . . .) Right. Sorry, the “Apprentice’s Column.” It’s like the final project for an apprentice stone mason before they can be called a full-fledged craftsman. So, it’s different and it stands out, but in a beautiful way. I love it!

Now something else I like is that there’s another St. Nicholas Church in Galway City. Technically, its full name is Our Lady Assumed into Heaven and St. Nicholas . . . but, for obvious reasons, we locals just call it The Cathedral. (I’m not sure if most people even know the full name.) It’s across the river from the courthouse and is on the location of the old jail. In fact, when it was decided to move the Cathedral to Galway, not only did they pick the spot of the old jail, but they also repurposed the old jail’s stones in the construction. So, along with an older traditional style, the weathered stones make most visitors think the Cathedral is hundreds of years old.

But in reality (are you sitting down for this one?), it just celebrated its 50th year! (You read that correctly – fifty!) This means that JFK was assassinated shortly after his visit to Ireland and Galway when construction was finishing. So, like most typical Irish homes, there’s an icon (of sorts) of JFK in a side chapel. The ceiling and stained glass windows, particularly the large rose-style ones, are breath-taking. But don’t forget to look down when you visit the Cathedral. The floor is Connemara marble, which is mainly green with white and black veins, but also some of it is red with white and black veins. You don’t see large slabs of Connemara marble like this used in construction anymore; it’s only mined in one quarry outside the city and they’re worried about running out soon, so it’s mainly just used in jewellery nowadays.

I could keep going and tell you about the pope’s door/balcony that was put in for his visit (not the most recent one, but the one a couple of decades ago) or the statue across the street of the woman emerging from the stone . . . but I’ll end with my favourite bit of the Cathedral (since I did that with the original St. Nicholas Church in Galway). Despite them being very intentional about using an old, cruciform style of church architecture, the altar is in-the-round. So, even though the Irish Church might be a bit stuck in the past, at least this church building is very Vatican II . . . and I really like that.