This week John Valters Paintner is sharing a guest post about how he fell in love with the Old Testament. Make sure to join him this summer at the Abbey (along with Ronna Detrick, Richard Bruxvoort Colligan, and Roy DeLeon) for an exploration of the scriptures and the questions to which they call us. Exile and Coming Home: An Archetypal Journey through the Scriptures is a six-week online class which begins June 16th! 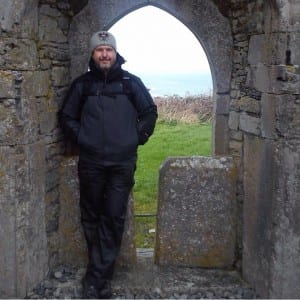 When Christine & I moved to Seattle eleven years ago, I had just taken a job teaching an Old Testament course at an all-boys Catholic high school. I was raised in a very Catholic family and attended Catholic schools from Kindergarten through high school. For the previous ten years leading up to the teaching position in Seattle, I had been a pastoral associate and a teacher in another Catholic high school. I am a trained educator and hold a master’s degree in theology. The new job in Seattle wasn’t exactly a baptism by fire, but when I was handed a Bible and told that it was the students’ only textbook, I did feel like I had been thrown in a vast ocean, far from shore with no lighthouse in sight. I needed help getting my bearings.

I knew the Old Testament. Or at least I thought I knew it. As it turns out, I was familiar with many of the major stories and basic theme. But that’s a bit like saying I knew the forest because I was familiar with some of the more widely known trees. It wasn’t until I found myself having to explain the Old Testament to teenage boys that I began to grasp the underlying arc of the Bible’s stories.

I didn’t set out to learn anything profound or new about the Old Testament. I just knew that I needed to have a better handle of what I was teaching. It became clear to me that I could not just sit down with my class every day and read some Scripture with them. They needed some structure. I needed some structure. I found a good student textbook and at first used that as a basis to plan out the year. I eventually adopted it as the student textbook. The boys often referred to it as their workbook and the Bible as their textbook. I also continued my own education into the Old Testament. I read books and took summer courses to stay ahead of my students’ many questions.

Once I, as the student of Scripture, had a better handle on the Old Testament (its history, its many authors, its themes, and its general story arc) then I, as the teacher of Scripture, had a better handle on how best to present the material to my students. Through my own study and the wisdom of others I was able to make some informed decisions about what to include, what to leave out, and how long to spend on what. (I never had enough time and often found myself annoyed at things that interfered with my lesson plans, like holidays and snow-days.)

The irony of learning more about the historical context of the Old Testament, is that the individual figures in that ancient text came more and more alive to me. Abraham and Sarah were no longer just great spiritual forbearers, but a real couple with real marital issues. Joseph wasn’t just the great dreamer, but also an arrogant youth with serious sibling rivalries to deal with. Moses wasn’t just the great prophet and liberator, he was a man who often struggled with his own faith. Naomi and Ruth were more than a couple of minor figures barely mentioned in a tiny and often overlooked book, but great examples of self-sacrifice and love. David wasn’t just a great king, but a conflicted and flawed hero.

And most important to my own faith, the prophets are no longer simply foreshadowers of the Messiah; the prophets are passionate and wise people who have a profound understanding of God’s will and humanity’s shortcomings. I learned that the prophets share many themes and techniques with one another, but I also came to known each of them as unique individuals who were deeply concerned for the people of their day. Through my study of the Old Testament this great pantheon of holy men and women came off their pedestals and came alive.

It took a few years, but I finally found a rhythm to teaching the Scriptures. What I didn’t expect to have happen was falling in love with the Old Testament. I was fully aware of its many issues and difficulties (particularly for modern readers), but that’s part of why I fell in love with it. I knew all the flaws, but loved it anyway.

I may teach a class at the Abbey of the Arts one day on the grand arc of the Bible, but for now I am glad to lend my expertise to the classes currently being offered. In “Exile and Coming Home,” we explore some of my favorite Biblical figures. We briefly cover their contextual role, but then delve deeply into how each of these figures are both very real people and archetypes that we can relate to in our own lives.

Another way in which I’ve brought my love of Old Testament figures to the Abbey of the Arts are two upcoming “Dancing Monk Icons.” When Christine and I first began discussing the possible creation of these modern icons of vibrant, dancing religious figures, I knew of two people who had to be part of this set: the Prophet Miriam and King David. Both are famous for their spontaneous, exuberant dancing in celebration of the Lord. Miriam led the recently freed Israelite slaves in dancing and singing when God stopped their pursuers. David danced before the Ark of the Covenant as it processed through the streets of Jerusalem to the Holy Mount. Neither figure would’ve been familiar with the monastic movement that came centuries later, but they knew when to dance.

Register for our summer online course!

Exile and Coming Home: An Archetypal Journey through the Scriptures

The scriptures can seem foreign and out of date to modern readers. The Bible is often ignored, misused, or abused even by those who claim it as their own sacred text. And yet, beneath all its modern baggage, it holds great sacred truths. Only through careful reading and reflection can we find a deeper kinship with our spiritual ancestors. It is time to put aside what we think we know and read again with fresh eyes what the scriptures have to teach us.

This six-week course will explore the universal experiences of exile and return home again through personal reflection on the stories of several Biblical figures and Psalms. These offer invitations into different archetypal themes of what it means to live meaningfully as a contemplative and creative person in the world. How might these potent stories and ancient prayers from the Hebrew Scriptures deepen our journey into becoming monks in the world and artists of everyday life?

Each week we will explore a different theme which break open the great archetypal themes of exile and coming home at the heart of the scriptures, a male and female voice from scripture, and a Psalm which deepens our understanding of the theme, connecting our prayers to the great lineage of monastic tradition.

The course includes reflections by John Valters Paintner, Richard Bruxvoort Colligan, and Ronna Detrick whose passions are the wisdom of the Scriptures for our world today. Roy DeLeon will be inviting you into a gentle movement prayer for the week’s psalm, to explore its meaning in an embodied way.

Each week you will be invited into reading, questions to ponder, the practice of lectio divina, creative invitations through writing and photography, movement prayer, as well as an online forum to have conversations with other monks reflecting on this journey. John, Richard, Roy, and Ronna will be facilitating this virtual gathering space. You are welcome to participate online as much or as little as needed for your own journey.