Becoming a *Monk in the World* with Paula Huston 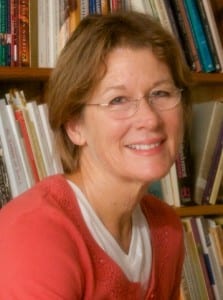 I first met Paula Huston about five years ago when I took a nonfiction writing class she was teaching through the fabulous Glen workshop.  The Glen is a really wonderful gathering of writers and artists wrestling with the questions of meaning and substance in life.  Paula is a gifted teacher and also offers her wisdom for writers through the Image Journal‘s online manuscript critique in creative nonfiction.  She is also a Camaldolese Benedictine oblate and the author of several books on the spiritual life.

Leave a comment below for a chance to win a free signed copy of The Holy Way: Practices for a Simple Life.

Becoming a monk in the world

“Blessed are the pure in heart,” says Jesus, “for they shall see God.”  The monastic way of life, including its radical withdrawal from the world and its many disciplines, is rooted in this simple premise.  But what, exactly, is purity of heart and how do we obtain it? For the Desert Fathers, the pure heart is one freed from self-regard’s knee-jerk response to being thwarted. Kierkegaard says it in a different way: purity of heart is to “will one thing.”

This kind of single-mindedness does not come naturally, and nowadays, surrounded as we are by compelling distractions, it has become nearly impossible. Entering onto the narrow monastic way thus requires a difficult but absolutely necessary renunciation: we begin by turning our backs on popular culture and its values. We build our huts on the banks of the rushing river and quietly close our doors, at least for a time, against the noisy tumult outside.

What does this new realm of silence and inaction make possible?  Protected from the constant barrage of confusing stimuli, we can begin to change our habits.  Aristotle says that virtue comes from good acts repeated until they become automatic; monastic wisdom declares that what we habitually do with our bodies and minds ultimately determines who we are.  If we truly want to live a life hidden in Christ, we must first undergo a total transformation of the self that begins with adopting new ways.

The result? We find that our purified hearts are now filled with an expansive love that exceeds anything we could imagine before we withdrew.  Or, said a different way: as would-be monks in the world, we must lose ourselves to find ourselves.

I love Paula’s reflections on the need for single-mindedness and the gifts silence and stillness offer.  I look forward to exploring this further together in our Advent online retreat.  Learn more about Paula and her work at her website.

Paula is one of the guest teachers for the Advent 2011–Birthing the Holy: Becoming a Monk in the World online retreat (November 27-December 24, 2011).  Paula will be reflecting on week 4 and the theme of “sacred yes”.

Christine Valters Paintner will guide us as we explore the true meaning of the Incarnation—God became flesh—and points to the spiritual importance of appreciating the bodies God gave us.The invitation to be truly present to our own body is now louder and more relevant as