There are three identities I currently hold dear

Poet: I look beneath the surface to find beauty in all things and then offer that back to others. I seek to cultivate this kind of presence in the midst of ordinary life, finding poems everywhere.

Hermit: Silence nourishes me deeply and I take regular times of solitude, often in the woods or by the sea to help me hear a deeper voice.

Mystic: I am called to follow in the tradition of the many who have felt a passionate desire for connection to the divine and I am blessed to share this path with others.

When I was growing up in New York City, one of my favorite places was The Cloisters, which is a branch of the Metropolitan Museum of Art on the northern tip of Manhattan.  It is a reproduction of a medieval monastery with cloistered garden, unicorn tapestries, glorious arches, and a stunning view of the Hudson River. It was the aesthetic dimension of monastic life that captured my imagination long before I understood anything of its religious side.

My spiritual roots are in Catholicism with a special love for the sacramental imagination, mystical love, and commitment to radical justice.

Later in life, while studying Christian spirituality in graduate school, I fell in love with the great 12th century Benedictine Abbess, Hildegard of Bingen.  I was smitten with her creative breadth and outpouring, her love of music, her poetic writing.  I wanted to know more about what shaped and inspired her soul which led me to the Benedictine path.  She was the doorway to my growing love of monasticism and eventually my becoming an oblate.

I bring my scholarly heart in service to this love of contemplative practice and tradition, rooted in the ancient ways of desert, Celtic, and Benedictine monks, as well as the contemplative streams found in other traditions, such as the path of yoga.  These paths lead me to the heart of stillness, the place of deep healing in the world.

My creative heart has led me to the study of the expressive arts, dream work, Jungian psychology, and work with archetypes.  While my earth-cherishing heart loves the wisdom to be found in the seasons and presence to the voice of creation.

I also have the heart of a pilgrim.  In spring 2012, my husband and I sold everything we owned in Seattle, WA, where we had lived the previous 9 years, including home, car, books, and most of our belongings, to set off on a grand life adventure and live overseas.  This pilgrimage brought us first to Vienna, Austria for six months, a place of great personal ancestral significance and where my father is buried.  We then moved to Galway, on the west coast of Ireland, the land where monasteries were once thriving and integral to the community, and where we now live. Here we have fallen in love even more with the wisdom of Celtic monasticism and the desert tradition which influenced the Irish monks so strongly. From this place on the sacred edge I continue to serve the Abbey through online programs, as well as welcoming monks in the world who come on pilgrimage.

I believe that the spiritual life is right here and now, in the midst of the quotidian.  We are not waiting for some better opportunity or clear space which will never arrive as we imagine.  As a Benedictine oblate, I commit to live as a monk in the world, bringing presence to paying my bills, washing dishes, being a partner in marriage, and navigating the ordinariness of life.

I come most alive in that fertile space where the inner monk and artist meet and dance together.  I created the Abbey out of a desire to host a space where other monks and artists could find a welcoming place for deep inner work and an encounter with the great Source of both silence and creativity.

I am committed to contemplative living, one rooted in Sabbath rhythms, and consider myself an urban monk and part-time hermit.  Most days you can find me praying lectio divina, writing, receiving photos, preparing to teach, collaborating with fellow monks and artists, going for a long walk along the shores of Galway Bay, swimming in the pool or the sea, practicing yin yoga, dancing, having tea with friends, cooking a meal, or on a date with my husband. 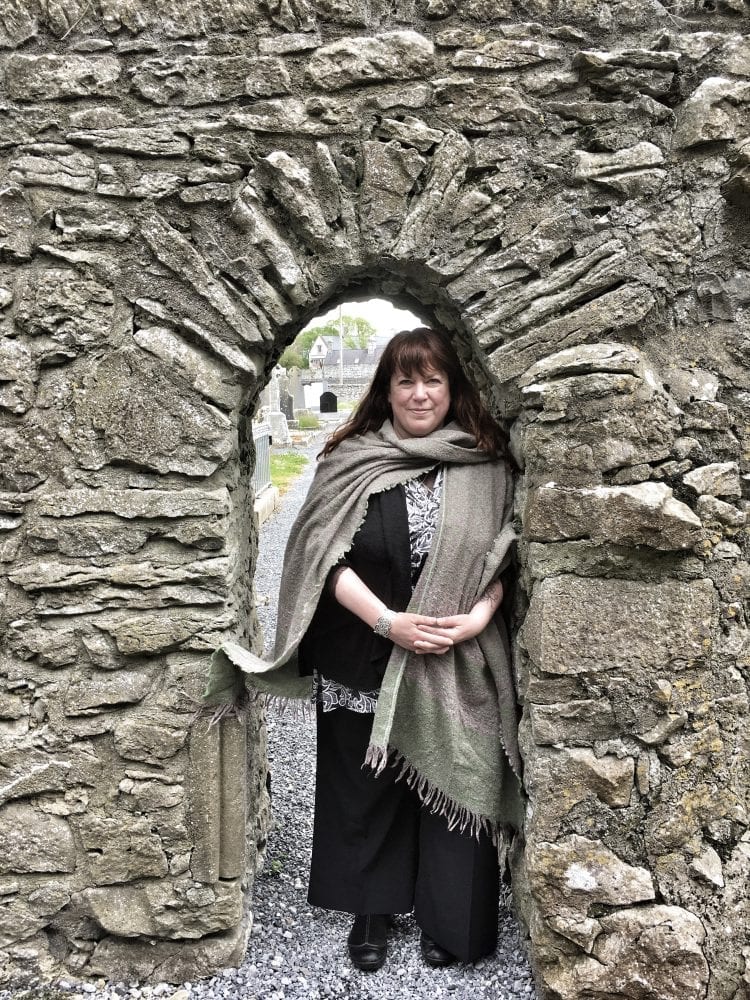 I believe in the revolutionary power of stillness and spaciousness,

and of practicing presence to life’s unfolding. I believe this commitment can change the world.
I believe in radical hospitality
to both the inner and outer stranger so that all parts may know themselves as welcome and part of a wholeness.  The monk’s path matters in this world of division, speed, and productivity.
I believe, along with the great writer Dostoevsky, that “beauty will save the world.”
At the very least it has saved me more times than I can remember from dwelling in a place of despair at the world.  I believe that when we tend to the birthings in our hearts, we cooperate with a divine creative force at work, always bringing something new into being.  The artist’s path matters in this world where it is so easy to grow cynical and believe nothing will change.
I believe that all of life is an ever-unfolding journey
and we never fully “arrive” in this lifetime, but commit to always beginning again and to always being surprised by God. Pilgrimage offers us the opportunity to encounter the stranger within ourselves, to journey to places which make us feel uncomfortable in the service of breaking something free inside of us. The pilgrim’s path matters in this world where we are encouraged to hold onto and accumulate comforts at any cost.

If what I write here resonates with your heart and soul, then you are truly welcome to this safe space of radical hospitality where you come as you are.  Feel free to bring your doubts, your longings, your dreams, and your laments.  There is space for all of it here.

While I hold my life experience in the highest regard as preparation for this work, I have also dedicated myself to ongoing education and development. Here are some of the programs I have completed:

Christine Valters Paintner has published two collections of poetry: Dreaming of Stones and The Wisdom of Wild Grace (both published by Paraclete Press) and she has a third collection titled Seventy-Two Names for Love due out in 2022 also from Paraclete.  Her poems have been featured in print and online journals in Ireland, the UK, Canada, and the United States. These are the poems available in online (rather than print) journals.